How to Clean a Muzzleloader

We give special thanks to October Country Muzzleloading, Inc. for letting us use their safety documents.

In order to provide a long and serviceable life for your muzzleloading firearm, certain maintenance steps must be performed. The information contained here has been developed over a black powder shooting career that spans nearly four decades. Is this the absolute final bit of advice on the subject? No, not at all, but everything contained here is how I do it, and it works for me. I realize my methods will cause disagreement from some, but this is the October Country website, so I am promoting my methods here. If you are pleased with your results, terrific, keep using them. I won't argue with you. If you are not pleased with what you are doing, why not try mine.

First of all, the importance of cleaning the rifle after shooting cannot be emphasized enough. Fouling is hygroscopic, which means it attracts moisture like sugar attracts flies. It really does not matter whether you have a blued barrel shooting real black powder or if you shoot synthetic powder in a stainless barrel with a chrome lined bore. You need to clean it when you finish shooting. Period. I am not a great advocate of using soap and water as a cleaning solution. It creates rust. Nor do I like anything that utilizes hydrogen peroxide, ammonia, alcohol or other harsh or caustic ingredients. Some of these produce damage to the stock and barrel finishes. There are better ways to do things.

Prior to cleaning the rifle, it is important to gather together the items you will need to accomplish the task. Following is my list: 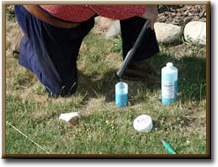 We are discussing a traditional, side hammer, hooked breach rifle that shoots patched round ball. Other styles will be discussed at a later time.

First remove the undergun ramrod. Then using the wedge drift, tap the wedge out of the escutcheon plates. Next place the rifle on half cock and lift the barrel out of the stock. If the clearances are tight, you might have to tap the bottom of the barrel on a surface to loosen it.

Next, remove the nipple using the nipple wrench. Turn the nipple counterclockwise. Then pour about three or four ounces of bore solvent into the vegetable can, drop the nipple into the solution to let it soak, and place the breech end of the barrel into the can, making sure the solution well covers the breech plug or drum. Take a cleaning patch and wet it thoroughly with bore solvent, center it over the muzzle, and using the cleaning jag installed onto the bench rod, push the patch down the barrel. A slotted rod tip will not work well, as it does not push the cleaning patch all the way to the breechplug. On the first pass, make sure not to go too fast, and work it back and forth in rather short strokes. A heavily fouled barrel will grab onto the patch and cause further grief. Don't ever push a dry patch down a dirty barrel. Once the rod is all the way down, start working it back and forth, cleaning the entire length of the barrel. This also cleans out the internal passages in the breach or drum. When using a good solvent, this should only take about six complete strokes the length of the barrel. Caution should be employed when bringing the cleaning patch up to the muzzle, as it is possible for cleaning solvent to escape past the jag/patch assembly, and squirt all over the place, especially if using a muzzle protector. 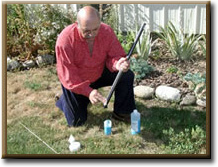 When the barrel is flushed to your satisfaction, withdraw the rod from the barrel and take the barrel out of the solvent. Hold the barrel above the level of the solution in the can to let it drain for about 30 seconds. Then let it set muzzle down for a few minutes to complete draining. Taking a dry patch, wipe the bore two strokes, turn the patch over and repeat. Continue doing this until the patch comes out clean.

Then dip the old toothbrush into the solution and scrub around the breech end of the barrel, making sure to remove all the caked on fouling. It might be necessary to let a wet patch soak on the fouling for a while in order to soften it.

Work some non-petroleum grease into a clean patch and using the ramrod/jag, wipe the complete surface of the bore, then wipe the outer surface of the barrel. Set this aside for the next step.

Using the correct sized screwdriver, remove the lock from the stock. Take a dry toothbrush and scrub the mainspring, and the tumbler and sear. Apply a light coat of grease to the place where the mainspring mates with the tumbler, and to the half and full cock notches of the tumbler. Then take a damp patch and wipe the outer surface of the lock and the hammer. Pay particular attention to the recess on the hammer face. Clean spent caps and fouling out with a small screwdriver. 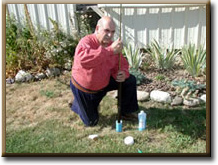 Retrieve the nipple from the solvent can and wipe clean. Put a small amount of anti seize grease on the threads and re-install it in the breechplug or drum. Place the barrel back into the stock, locating the hooked breech into the standing breech and press the barrel/stock assembly back together. Replace the key. Wipe the stock with a lightly greased patch and it is ready to put away for the next time out. It is important to note that if you are using soap and water for a cleaning solution, it is best to plan on wiping the bore with a preservative once a day for the next several days, as rust will attempt to start in the bore.

1) Traditional style rifles shooting conical bullets. Since a patched round ball doesn't leave lead residue on the barrel, bore brushes are not really necessary. However the base of a conical can be flame cut, and leading of the barrel can occur. Your first step in cleaning the barrel would be to scrub the bore with a proper sized bore brush, then continue on as outlined.

2) Fullstock rifle. For percussion rifles, a flush tube is invaluable. Remove the lock and the nipple and install the special nipple that comes with the flush tube into the hole. Put the tube into the solvent and proceed as directed. For flintlock rifles, a flintlock flush tool works well. Remove the lock and install the tool, put the tube into the solvent and proceed as above. Typically on these style rifles the breechplug has a flat face and fouling builds up there. Put the fouling scraper onto the ramrod, seat it against the face of the plug, and twist in a clockwise direction until all resistance has stopped. Remove the rod and invert the barrel, letting the scraped fouling fall out. Repeat until clean.

3) Inline rifles. Following the manufacturer's instructions, remove the bolt or plunger from the receiver. Although there is a debate on how best to clean the in-line rifle, I believe a better job is done by cleaning the bore with the breech plug in place, then removing the plug and cleaning it separately. This allows the fouling to be washed away with the solvent solution. Also, it prevents getting solvent into the trigger assembly. So, remove the nipple from the breech plug and install the flush tube adapter into the nipple opening and attach the tube. Put the tube into the solvent and clean as outlined above. It is important to remove the breechplug every time you clean the rifle, as carbon will lock the plug into place if you don't. Using a bristle brush, clean the breechplug threads and around the nipple orifice. When re-installing the plug, always use a bit of anti-seize lubricant in the threads. Sabots are used in these rifles quite often, and plastic residue builds up in the barrel quite fast. We suggest a good plastic solvent and a bore brush to clean this out.

For cleaning I believe Ol' Thunder Bore Solvent and Patch Lube is the best I have ever used. As noted at the start, I will not use products containing Hydrogen Peroxide, Alcohol, or Ammonia on my rifles, and I wouldn't use them on yours, either. Besides Ol' Thunder, Thompson Center #13 is good, and so is Dixie Gun Works Black Solve. EZ Clean by Pyrodex works well with synthetic powders. CVA makes an excellent sabot solvent.

For cleaning patches, I like the old, original issue GI Patches, but they are getting difficult to find. In lieu of them, Ox Yoke cleaning patches are best. I prefer the square, GI style, but some people like the round patches better. For those that like to cut their own cleaning patches, a medium to heavy weight flannel with a thick knap is what to look for. Greases and preservatives Hands down, I think Bumblin' Bear Grease is the best on the market. It is a great preservative for all metal parts, it brings out a soft luster in the wood, and it's also a great leather dressing and preservative. It works well as a patch lube too. Second best lube is Just Good Lube by Ol' Thunder Manufacturing (jojoba oil based), then Wonder Lube by Ox Yoke and Bore Butter by Thompson Center are comparable with each other. Ballistol is a good preservative. However I have a problem with the odor. If you can tolerate the aroma, it works great.

People make the false assumption that cleaning a muzzleloader is a long and tedious process. However, if done according to the above outlined procedure, it is relatively fast and easy. A little effort expended after each day's use will keep your muzzleloading firearm in excellent condition for as long as you care to keep it. Hopefully it will be handed down to someone who will continue the sport.